A roundup of books I read in November. Haruki Murakami’s Killing Commendatore and Stephen Markley’s Ohio were the two best books of the month. In fact, those are the only two books I would definitely recommend. Unless you’re an aspiring diarist, in which case you should read Writing Down the Bones. 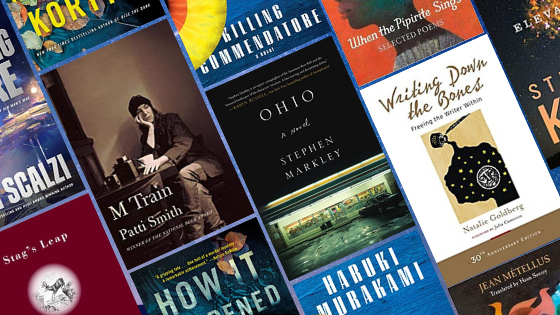 Killing Commendatore: The plots of Haruki Murakami novels are always difficult to describe. In his latest epic work, the physical manifestation of an idea appears to guide a portrait painter through a life altering journey. Really, all that needs saying is you should read this novel by one of our best living authors. (5/5 stars.)

Ohio: A powerful debut novel by Stephen Markley that revolves around  four former high school classmates meeting in a small Ohio town. The story touches on the effects the opioid crisis and ongoing wars has had on a generation. Beautifully written. (5/5 stars.)

Writing Down the Bones: First published in 1986 this writing guide by Natalie Goldberg could be read as a daily devotional. It mixes Zen philosophy with solid writing advice for those who want to establish a daily practice. (5/5 stars.)

The Collapsing Empire: The first in a series by John Scalzi this book traces the pending collapse of humanity. Trading colonies have settled across the galaxy but trouble arises when the extra-dimensional Flow used to travel and across great distances, becomes unstable. (4/5 stars.)

How it Happened: An FBI agent puts his career on the line as he tries to find the truth in a story told by an unreliable witness. I want to call this a good beach read, but as it’s December it would make a good fireside read. (4/5 stars.)

Stag’s Leap: Poems: Following a divorce, Sharon Olds writes poems of grieving and healing. She won the 2013 Pulitzer Prize for Poetry for this collection. (4/5 stars.)

M Train: While not as powerful as her autobiography Just Kids, this collection of Patti Smith essays follows Patti Smith as she visits as series of coffee houses around the world. It reads as a series of journal entries, which I find appealing. (4/5 stars.)

When the Pipirite Sings: This English translation of poems by Haitian writer and doctor Jean Métellus. The poems use powerful and at times vivid language to deal with themes ranging from colonial oppression to Haitian spiritual and cultural identity. But make no mistake, these poems have a high specific gravity and can be slow to get through. (3/5 stars.) Read full review.

Elevation: As a Stephen King fan I found little to be excited about in this very short and thinly plotted story about a man dealing with extreme weight loss while trying to make peace with a lesbian couple living next door. Surprisingly this novella won the 2018 Goodreads Choice Awards for horror. It’s especially surprising because this is not a horror book. (3/5 stars.)