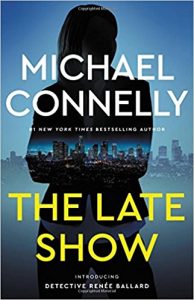 Michael Connelly introduces a new detective in The Late Show (Little, Brown and Company, digital galley), a fast moving police procedural that is hard to put down. Renée Ballard works the LAPD overnight shift, responding to everything from burglaries to homicides. Because she has to hand off all of her cases at the end of her shift, she rarely gets to see anything through to completion.

When Ballard becomes particularly attached to two cases – the beating of a prostitute and a mass shooting at a nightclub – she goes against the wishes and backs of her partner and LAPD brass to dig deeper and try to get some closure.

Connelly is a master story teller and with Ballard introduces a new character who is well versed in modern police work. She is at home navigating cell phones and computer databases in a way that Connelly’s other fictional detective, Harry Bosch, is not.

The Late Show is the first of a new series featuring Ballard and will allow Connelly to explore some different aspects of detective work. And even write about cases other than homicide. But fans of Bosch and Mickey Haller should not despair, Connelly tells us in a Q&A interview at the Omnivoracious book blog that he has a new book featuring those characters coming out in the fall.