'Rescued from ISIS' a disappointing telling of a compelling story 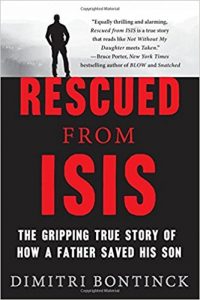 In 2013 former soldier Dimitri Bontinck’s 18-year-old son, Joe, fell under the sway of a radical Islamic mosque and traveled to Syria from Belgium to take part in that country’s civil war. Rescued from ISIS (St. Martin’s Press, digital galley) recounts his many harrowing trips into Syria to find and ultimately bring his son home.

Bontinck has become something of a minor celebrity in his own country and his story has even been retold in The New Yorker and on CNN. The relevance of Bontinck’s story was reinforced last month when a 16-year-old German girl was found fighting alongside the Islamic State in Iraq. At least half of Rescued from ISIS is dedicated to similar stories where youth were recruited through social media and clever marketing, radicalized and sent to Syria or Iraq to fight.

Bontinck recounts his efforts to help many families trying to reclaim their own children, but his son was one of the few success stories. Not all of the radicalized young men and women were as willing to leave as was his own.

While Bontinck’s story is compelling, the telling of it is not. The book too often lets loose platitudes such as “love wins over hate” and rushes through pivotal moments that should have been given more attention. For example, the escape of Bontinck’s son from Syria while sitting on the back of a motorcycle should have been an adrenaline pumping play-by-play, but was covered in only one page.  It was then followed by a rather prosaic telling of the father and son reunion. The book is surprisingly short on drama.

Rescued from Isis feels disjointed and seems to take on to much, leaving many rescue attempts thinly told, but going into detail on the trade in stolen antiquities and even recounting a sexual encounter that adds nothing to the story. It sounded like simple boasting.

Finally, the story is almost exclusively told from Bontinck’s point of view and we learn very little of Joe’s time with ISIS. There may be a reason for that, but as a reader we’re left to wonder why.