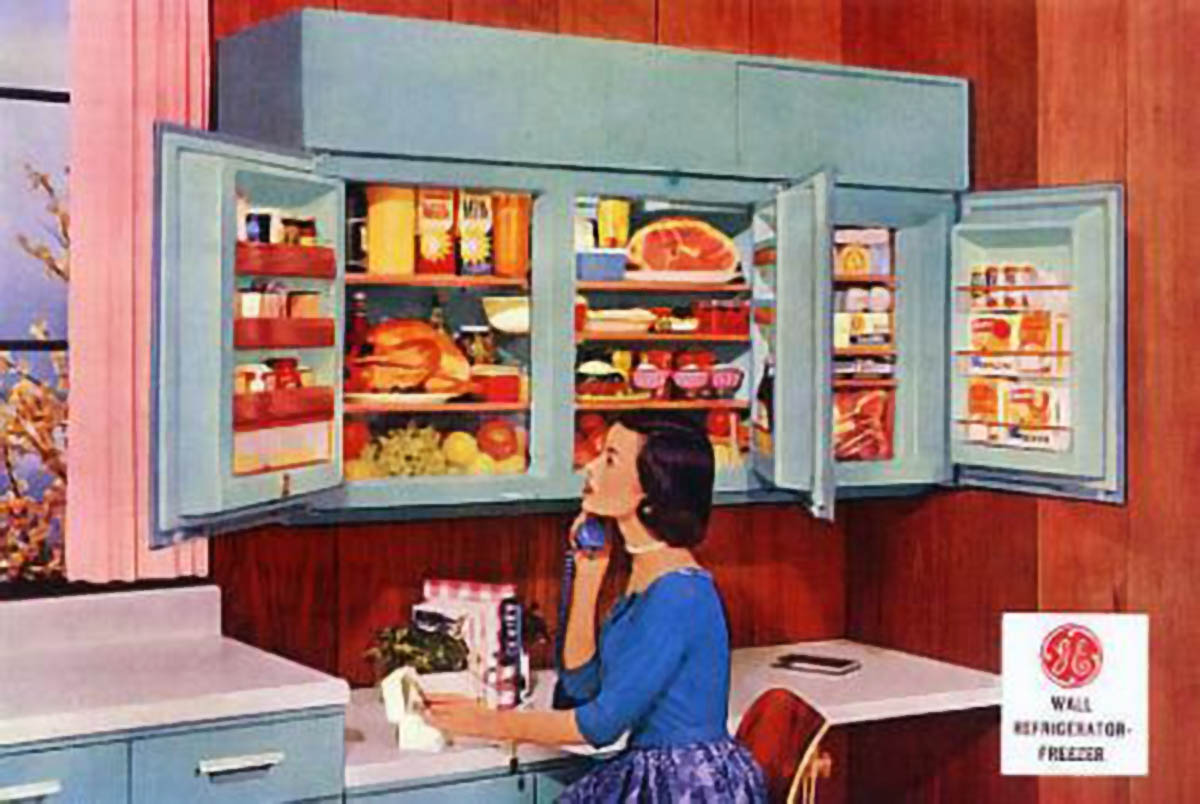 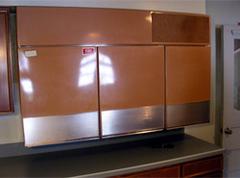 This photo on Flickr shows a working unit in a kitchen in Excelsior Springs, MO.[/caption]

I was talking with my mother-in-law in 2012, getting her to reminisce about some of her past homes when she mentioned a house in St. Louis in the late 1950s that had a hanging refrigerator. Stop, back up, “let’s talk some more about this refrigerator, Mom.” Yes, she says, it was as neat as it sounds but it had a worrisome habit of not working all of the time. This came with the added complication of having to be removed from the wall to be repaired. We’ll file this under the category of good in concept, bad in execution. She was most likely describing the GE wall-mounted refrigerator. GE wall-mounted refrigerator and matching cabinets. The left two compartments of the unit are the refrigerator. The right side is the freezer and the compressor sits on top.[/caption]

The GE wall-mounted refrigerator at left was part of a set being sold in Indianapolis. It gives you a good idea of what one looked like from the outside. The GE at the top of this post shows the refrigerator in its teal glory, though it also appeared frequently in salmon. The left two compartments are the refrigerator, the far right is the freezer and the compressor sits on top. And, of course, I should have known that one of the brilliant commenters on Shorpy had already touched on the topic, supplying the image above. The inside of the GE wall-mounted refrigerator.[/caption]

This poor artifact at right was being sold on Craigslist and gives you a look at the inside of a unit.There is not a lot of information online about the GE wall-mounted refrigerator, but it seems to have been GE Model LW11P with dimensions of 64 inches wide, 39.5 inches tall and 17.5 inches deep. I was also able to track down a few images of the unit and have included thumbnails in this post. Click on a thumbnail to go to the original image and related information.

3/28/2017 Update: This article used to be hosted on Vintagraph, but because of the personal nature I decide to move it and the comments here. The original post was from 2012. I hope this gives the topic some new life.