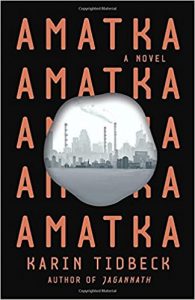 When information assistant Vanja travels to a neighboring colony to collect information about hygiene habits she quickly gets the feeling things aren’t well. She notices a world unraveling at its edges, despite the community’s best efforts to maintain its structure.

Amatka is an unusual and intriguing novel where physical objects don’t behave in a normal manner. Material things must be accurately labeled with their purpose, lest they dissolve into useless globs. Even songs and poetry are put to use to keep order. But Vanja suspects there is more to the world than the restricted colonial citizens are allowed to see and she walks a fine line trying to discover the truth.

Amatka can be read as an allegory on the restrictive nature of political, or politically-correct, speech.  When members of a social group are directed in the use of language too tightly, and judged too harshly for its misuse, new ideas fester and the world grows smaller.