Apollo 8: The Thrilling Story of the First Mission to the Moon By Jeffrey Kluger ★★★★★ 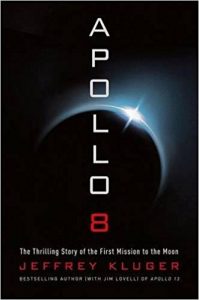 In December 1968, less than two years after three astronauts burned to death in an Apollo capsule, astronauts Frank Borman, Jim Lovell and Bill Anders left Earth to become the first humans to travel to the moon. Apollo 8: The Thrilling Story of the First Mission to the Moon is packed with all of the drama inherent in all stories dealing with the early space program.

The mission was later overshadowed by the more dramatic moon landings, but Apollo 8 has an important place in history. The book is a concisely written account of that mission and the activities and training leading up to it. Author Jeffrey Kluger includes biographical information about all of the players involved, but the story focuses on Apollo 8 Commander Frank Borman.

At just 320 pages, the book moves at a rocket’s pace (see what I did there) and helps maintain Apollo 8’s place in history.